Photoperiodism: Explain The Process With an Example

In plants photoperiod and temperature affects flowering, fruit and seed reproduction, bud and seed dormancy, leaf fall, and germination. Photoperiod affects flowering when shoot meristems begin producing floral buds rather than leaves and lateral buds. Depending upon the time-duration of the photoperiod, the plants are divided into three categories. 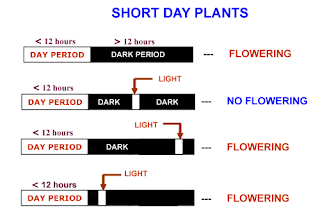 These plants need a relatively short-day light period (approx 8-10 hours) and a continuous dark period of approximately 14-16 hours for the next flowering. These plants are also known as long-night plants. 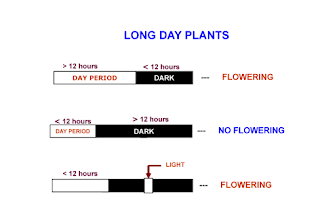 These plants need a longer day-light period (approx 14-16 hours) in a 24 hours cycle for the next flowering. These plants are also known as short-night plants.

3. Day-neutral plants (DNP): These plants flower in all photoperiods between five hours to twenty-four hours of continuous exposure.

Difference Between Short-Day And Long-Day Plants 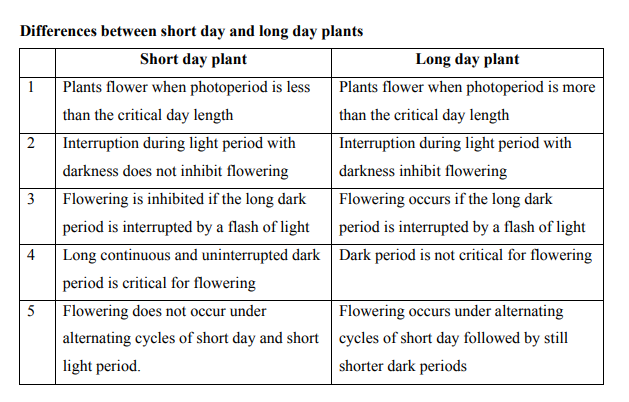 Work of Garner and Allard

The effect of photoperiodism was first studied in 1920 by Garner and Allard. They studied tobacco plant flowers only after exposure to a sequence of short-days. Tobacco plant naturally flowers under the same circumstances,- in autumn, but flowering could be induced by artificially giving short-day treatment in a greenhouse in the summer. With further studies, they were capable to classify flowering plants into long-day plants, which require long-days for flowering, and day-neutral plants flower without being affected by photoperiod.

Importance of the dark period

EFFECT OF QUALITY OF LIGHT

Flowering is also influenced by the quality of light. CCocklebura short-day plant, will not flower if its long night is interrupted but experiments revealed that red light was effective in preventing flowering but reversed the effect of red light. It was also demonstrated that the last days’ treatment always determines the response. This response to light intensity and quality led to the discovery of a blue light sensitive Protein pigments, the phytochromes.

Phytochromes exist in two forms P 660 and P 730, P quiescent (inactive) form absorbs red light at a wavelength of 660 is converted to active P 730. P 730 absorbs far-red light of 730 nm and’ converted to P660. In nature, the P660 to P730 conversion takes place daylight and P 730 to P 660 conversion occurs in the dark, Thus dung the day a plant has P 730 phytochrome while during the night it contains more P 660 phytochromes. The presence of either form provides the plants with a means of detecting whether it is in .a light or dart environment. The rate on which P 730 is converted to P 660 gives the plant a “clock” for measuring the duration of darkness,

According to hypothesis P 730, converted from P 660 by the absorption of red light, would inhibit flowering in short day plants promote flowering in long day plants. Because P 730 collects in the day and declines at night, short-day plants could flower only if the night were long sufficiently, during which a great amount of P 730 would not be totally inactivated, so that enough P-730 would remain at the end of the night to encourage flowering. But now it is normally agreed that the time-measuring phenomenon of flowering is not completely controlled by the interconversion of P 660 to P 730.

Other factors: Other factors like presence or absence of light and length of dark or light period also play an important role in flowering.

Florigen: Phytochromes seem to be responsible for the detection of either light or darkness. The biological clock once stimulus causes the production of florigen hormone in leaves, which travel through the phloem to the floral buds, initiating flowering.

Differences between Pr and Pfr forms of phytochrome 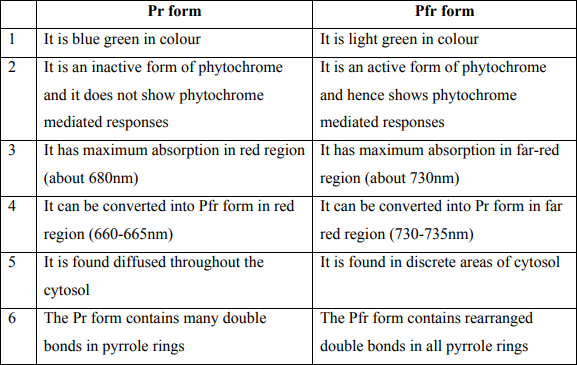 Photoperiodism is a sample of physiological preconditioning. The stimulus is provided at one time and the reaction is observed after months. Exposure to longer photoperiods quickens to flower (E.g). In wheat, the earing is hurried. During long light exposure, Pr form is transformed into Pfrform, and flowering is started. If the dark period is greater, Pfr is transformed into Pfr form that inhibits flowering.
The significant phytochrome-mediated photo responses in plants include photoperiodism, root germination, sex expression, bud dormancy, rhizome formation, auxin catabolism, leaf abscission, epinasty, flower induction, protein synthesis, pigment synthesis, respiration, and stomatal differentiation.

Biennial and perennial plants are stimulated to flower by exposure to low temperatures. This is known as vernalization.

The low-temperature stimulus is received by the shoot apex of a mature stem or embryo of the seed but not by the leaves as in photoperiodism. For some plants, vernalization is an absolute requirement or in some cases, it simply assists in inducing flowering.

Vernalin and Gibberellin: Temperature around 4C is found to be very effective. It stimulates the production of “Vernalin” which induces vernalization. It is nowadays believed that vernalin is not essential but actually it is gibberellin.

Importance of Photoperiodism and vernalization

Photoperiodism vernalization serves to synchronize the reproductive behavior of plants with their environment, ensuring reproduction at favorable times of the year. They also confirm that members of the exact species flower at the same time, favorable cross-pollination for genetical variability.

Free Ways of Generating Traffic In this highly digital world, targeted traffic to your website could not be any more valuable. You can have the best…

Sorry, we detected that you have activated Ad-Blocker.
Please consider supporting us by disabling your Ad-Blocker, it helps us in developing this Website.
Thank you!

Most interactive websites use cookies to let us retrieve the user’s details for each visit. Cookies are used by our website to enable the functionality of certain areas to make it easier for people visiting our website. Some of our affiliate/advertising partners may also use cookies.